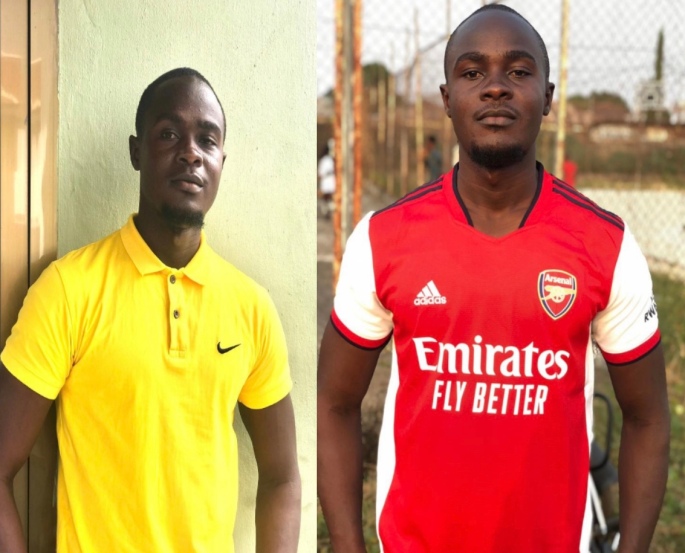 Sierra Leone is a religiously tolerant country in the Western part of Africa. Many other countries in sub-Saharan Africa sometimes envy the wrap-up of both Muslims and Christians, especially when they visit one another in churches and mosques, and sometimes intermarriage.

Abu Bakarr Kabia and his homosexual Partner George Kamara, are Wanted by the Sierra Leone Police, unfortunately, the latter, George Kamara lost his life at the hands of unknown persons in their former community.

Among other things, homosexuality is prohibited in the country and the two main religions in Sierra Leone see this kind of act as devilish and anyone found wanting of such should be punished or driven out of the country. Abu Bakarr Kabia and his partner George Kamara were both residents of 15 Osman Lane in Calaba town, Eastern part of the country’s capital Freetown. According to information received by this medium, George and Kabia have been childhood friends and they discovered their sexual orientation at the age of 17, since then, they have been actively involved in the lives of each other.

Amara Turay, not his real name, the chief Imam of the Calaba town Community mosque was a close friend and a teacher of Kabia who usually led him and others in Islamic prayers and counseling, so the latter would change from homosexuality. Imam Turay believes that if Kabia and his partner change from their current sexual orientation, God will have mercy on them and they will be saved from the punishment of hell fire and the wrath of God upon their community will be saved. The old man also affirmed knowing Kabia, and his family for several years. He said that when Kabia was growing up as a boy he was very respectful and hardworking which is why when he later knew of his sexual orientation he never gave up on the young man even when others did. “I believe that it is only by counseling Kabia that will save him from the wrath of God for practicing homosexuality but community punishment or stoning them is not the good way and I felt bad about the death of his partner George. George himself was committed to his five daily prayers, he even fasted during the month of Ramadan. Being killed for what he chose is not to be determined by any human being but the creator Allah,” he said.

He then intimated to this medium that Mr Kabia called him on phone that he would not be able to come back to the country due to what he has heard about what his community had done to his partner George, so he is afraid to return home. He furthered that he informed the congregation (Jama’at) about Kabia’s predicament and some were sad about the news while some were happy. They said homosexuals should not be entertained in the house of God, and he was told by Kabia that he wanted to move to an unknown location due to the pressure mounted on him, which he could no longer withstand. “After he called me in July this year, I saw their names and pictures on the wanted list on social platforms as members of those who sponsored and participated in the August 10th violent protest that took the lives of 6 Sierra Leonean police officers and 29 civilians but I was surprised because that young man has been hiding long since before the August 10 violent protest for fear of his life,” Imam Amara Turaysaid.

Furthermore, eyewitnesses believed that Kabia was persecuted by his paternal uncle who came to live with them in their house. Accordingly, after the death of his father his uncle wanted to remarry his mother but Kabia was against that belief and tradition and he told his mother not to do it.  His uncle hated him for that and whenever something unfavorable came up, his uncle would be the first to tell the community people about it.

Homosexuality in the country is a taboo and many young people have been disowned or denounced by their parents, community, and townsmen for practicing it. Some have been secretly beaten to death by community people like in the case of George who was seriously beaten up by unknown persons. They both were attacked on 22 July with sticks and stones, Kabiawas able to escape for his safety, thanks to his lucky star. It was after the August 10 insurrection,  Kabia and dozens of other Sierra Leonean youth were declared wanted by the Sierra Leone police on the 20th of August 2022.

According to the record of the Head of the Criminal Investigation Department (CID) of the Sierra Leone Police force, chief superintendent Richard Robert said that both people are not in the detainee’s record. He however confirmed that they are indeed among the persons of interest for the allegation of public disorder, perpetration of violence against the state, terrorist act of insurrection, and attempted coup d’état among other criminal offenses.

Kabia’s uncle was glad when he saw his nephew’s name and photos on social media as wanted by the Sierra Leonean Police and according to him, he said, that is the price every wayward son could get, as he deprived him of marrying his mother.

It could be evidence that the photo of Oladapo OlaitanOlaonipekun alias Dagrin, a Nigerian rapper born in Ogun, Nigeria and died in April 2010, was captured by the Sierra Leone Police as one of the wanted persons for the August 10 “INSURRECTION” as it was termed by the President of Sierra Leone, His Excellency Julius Maada Bio in his State Speech to the citizens of Sierra Leone. He said the Insurrectionists wanted to remove him from governance, which is unbelievable because the Soldiers are right at the State House, a civilian with a bare hand cannot remove a democratically elected president without the aid of the military.

Some big customers of Zenith Bank (SL) Limited have been complaining bitterly about bad customer service at the highest level at the bank. Some of them have even threatened to close down their accounts and leave the bank. Some customers have complained about how the bank is even blackmailing them by stalling their business transactions based on trivialities.

Some big businessmen requesting facilities from the bank are being frustrated by the heartless way in which the bank is treating them. “The bank is undermining the New Direction Government policy of empowering indigenous business people by delaying the implementation of some major government projects through some senseless bureaucratic policies”, one customer said.

The bank’s Managing Director in Sierra Leone is Chijioke Ejilemele. He is described as very arrogant and self-conceited.

This medium tried to get the side of the Head of Marketing, but unfortunately, she abandoned our telephone interview questions.