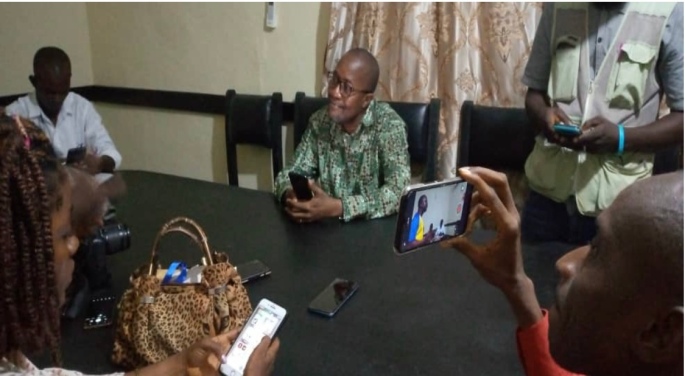 Monday the 29th of August, 2022. The minister of information and communication Mohamed Rahman Swaray engaged journalists in Bo about the August 10 insurrections that happened in Freetown during which innocent people lost their lives including Sierra Leone police officers (already buried).

Mr Swaray described the insurrection as undemocratic riots because it was not just a protest against the cost of living but rather it was a well-planned coup organized by hungry politicians to unseat the democratically elected government. “The August 10 riots in Freetown was not a protest against a high cost of living but an organized coup planned by politicians who do not want the peaceful co-existence of this nation,” he said

Mr Swaray affirmed to newsmen that the bodies of the civilians who were killed during the August 10 insurrections have been conveyed to Connaught mortuary. He continued that the government is calling on all parents and family members to go to the Connaught mortuary to identify their loved ones, after identification of the bodies by family members and the government will call on a qualified pathologist to conduct an autopsy examination before they are buried. “The government has called on the general public to go and identify their relatives at the Connaught hospital mortuary before we can conduct an autopsy examination to assert the cause of their death,” said Mr Swaray.

He also congratulated the people of Bo City and its entirety for maintaining law and order in Sierra Leone. He said that Bo district is always ready to support the development agenda of president Bio’s administration. He said, the government of Sierra Leone have instituted a team of investigators to investigate the August 10 insurrections, and the government will not leave any stone unturned. The government of president Bio will bring to book all those who were organizers of the August 10 insurrections and that the law will take its full force on anyone who will be found guilty.

He used the engagement to call on all citizens who have attained age 18 and above to go out in their Chinese numbers to register. He said registration is the only means a citizen can use to choose a leader of their choice and also to remove any government through the electioneering process. He confirmed to this medium that the August 28 mudslide flooding that occurred in some parts of Freetown left six people dead, including children and properties worth millions of Leone were destroyed.