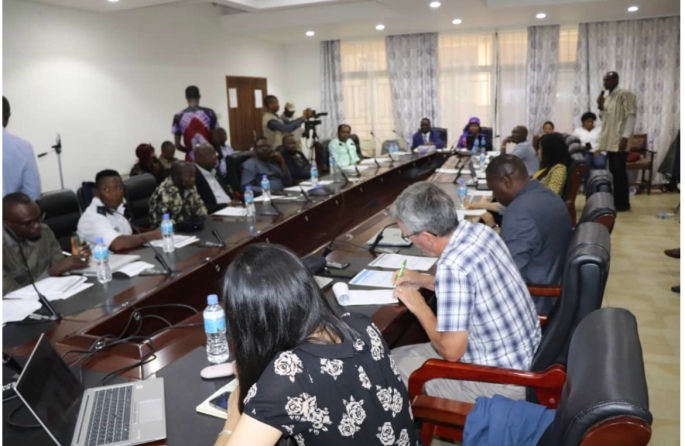 The Ministry of Tourism and Cultural Affairs (MTCA) and the Ministry of Environment (MoE) have held a two-day technical meeting with UNESCO Experts and other state actors on the process of compiling nomination dossier for the Gola-Tiwai Complex. The meeting was held at the MTCA’s Conference Hall, Kingharman Road, Freetown.

The UNESCO World Heritage Centre based in Paris, France, supported by the Government of Japan has prioritized Sierra Leone to receive assistance in 2022 to build the technical capacity of Sierra Leone for Tiwai Island and Gola Rainforest National Park to be on the World Heritage list. Sierra Leone should complete and submit the dossier by the end of January, 2023. Prior to the two-day technical meeting, the UNESCO experts toured and held stakeholder engagements at TiwaiIsland and Gola Rain Forest National Park.

Opening the first of the two-day session, the Deputy Director of Culture, Ishmael Kamara noted that the placement of Sierra Leone to the World Heritage List requires process, and that getting thus far, they have enjoyed the political will in the presence of the Tourism Minister, Dr. Memunatu Pratt and Minister of Environment, Professor Foday Jaward. He said the opening session was to highlight the commitment of stakeholders and the subsequent development of the nomination dossier.

The Director of UNESCO World Heritage Centre of Africa Unit Muhammad Muhammad Juma via zoom expressed gratitude to the government of Sierra Leone for organizing the meeting and the government of Japan for the financialsupport. He said nomination is not the end of the process but the beginning of the life-long responsibilities, while hoping that Gola and Tiwai will be sustainably conserved.

Representative of the Permanent Delegation of Japan to UNESCO, Minister Naoka Hirayama in her zoom presentation said 2022 is a special year for them as it marks the 50th anniversary of the adaptation of the World Heritage Convention and also coincides with Tokyo International Conference on African Development. She said Japan has been supporting ten African countries including Sierra Leone to enhance their capacity for the nomination process and appreciated Sierra Leone for starting the preparation of the nomination dossier for Gola-Tiwai Complex.

The Head of Environmental Foundation for Africa, Tommy Gannet said the experience of spending four days in the field with the experts underlines the essence of the whole process, saying that it was critical, timely and very necessary. “I appreciate the support of the Japanese government and also acknowledge the inspirational support of the two Ministers in getting us this far, and I am confident that what we are doing now will yield positive outcomes”, he said.

The UNESCO Wildlife Conservation Consultant, Matthew Hatchwell noted that at this stage of the process they are aware that in six months’ time the dossier would have been submitted to UNESCO. He said they are aiming to have the draft nomination by the end of October and called on state actors to provide answers to questions that came up during their tour.

In his remarks, the Minister of Environment, Professor FodayJaward said his Ministry has been involved in the process and has worked closely with the Tourism Ministry to ensure that this process comes to fruition. He added the his Ministry stands to gain a lot from the exercise considering the protection of climate change crisis, bio-diversity laws and pollution which he said are all geared towards the protection of the ecosystem. “Key among the benefits if the Gola-TiwaiComplex materialises is preserving the endangered species that are in extinction”, he said.

In her statements, the Minister of Tourism and Cultural Affairs, Dr. Memunatu Pratt maintained that the exercise was historic as it has never been done before in Sierra Leone which she said speaks volume of President Bio’s leadership. She continued that UNESCO is a key government partner in promoting Education, Culture and Heritage. She said their journey with UNESCO in the field of tourism and culture started a long time ago but since 2005 government only ratified the 1972 Convention on World’s Cultural and Natural Heritage among the six UNESCO Conventions. “In May 2012, six heritage sites were formally submitted to UNESCO’s tentative list of cultural and natural sites and under my leadership in 2021, the country completed and submitted the periodic reporting and also participated in engagements on UNESCO’s operations, expectations and vision of the African continent and the Japanese funded project came that focuses on capacity building programme for the nomination of world heritage sites on the African continent” she explained.

She furthered that it was due to cabinet approval and the ratification of all six UNESCO conventions by the Sierra Leone parliament that gave the opportunity to benefit from UNESCO activities for which she said they are a proud member of UNESCO Cultural Development.

Day two of the meeting was centered around discussions on outstanding universal values, criteria, integrity and comparative analysis. Discussion on the roadmap of the preparation of the nomination dossier (roles, responsibilities and timeframe) climaxed the occasion.

The Regional Rice Value Chain Project (RRVCP) in the Ministry of Agriculture and Food Security in a meeting with stakeholders in Torma, Bum Chiefdom, Bonthe District, has officially handed over the contractors for the rehabilitation of storage facilities and the construction of market stores to the Paramount chief and other chiefdom authorities.

Speaking at the meeting, the Project Coordinator of Regional Rice Value Chain Project (RRVCP), Abdulai Bun Wai, informed the gathering that the significance of the meeting was to formally introduce the contractors who have been hired by his project management unit to deliver key infrastructural facilities as part of the project mandate.

Mr Wai used the opportunity to update the stakeholders of Tormabum that the Regional Rice Value Chain Project is divided into two broad categories, the farm support infrastructures which constitute the rehabilitation of two storage facilities, construction of one store and rice milling facilities as well as a drying floor. The other component is farm production which deals with cultivation, processing and marketing. Similarly, construction work on a modernized community market at Tormabum is also in progress.

The Project Coordinator pleaded with the Paramount Chief and the various agribusiness companies occupying the dilapidated storage facilities to relocate to other building temporarily within one-week so that the contractors would commence operations immediately.

On his part the, the Paramount Chief of Bum Chiefdom, Bonthe district, Hon. Alex J.J. Kainpumu II reiterated that his chiefdom’s total support to the project while expressing his profound thanks appreciation to the project management Unit of the Regional Rice Value Chain for their hard work despite the challenges.

PC Kainpumu called on both the Abhajar Rice Development Company and the West African Rice Company to give-up the storage facilities for rehabilitation as it is for the development of the chiefdom and the entire country.

Representatives from Abhajar Rice Development Company and the West African Rice Company Yayah A. Kamara and Ibrahim Conteh welcomed the refurbishment initiative of the said facilities by the Government of Sierra Leone through RRVCP. As partners, they would pledge their fullest cooperation with the project team and the Bum Chiefdom Authorities.

Receiving the contractors, the Paramount Chief cautioned that his administration has zero tolerance for theft, especially stealing of construction materials meant for the chiefdom projects, and called on them to purchase local construction materials like sand, stones, boards and sticks from the chiefdom people as well as to employ young people in chiefdom   both skilled and unskilled.

The Irrigation and Civil Engineer, of the Regional Rice Value Chain Project, Alhaji Mohamed Sesay assured the stakeholders of rigorous monitoring of the work to ensure that the quality of work meets the project expectations.

Construction of the Tormabum periodic market was awarded to the Datum Line International Company Limited, contract was signed in May, 2022. Completion of this project is expected in eight months’ period after signing. Similarly, the Construction of one storage facilities will be done by the Ram Jalloh Constructions and General Services. Official signing of the contract took place in July and is expected to be completed within eight months. Meanwhile, the rehabilitation of two stores will be undertaken by the Aminata Frazer Constructions and Engineering Services, contract signed in July and completion period will be six months after signing.

The meeting was climaxed by site visitation and conducted tour of the facilities was carried out to enable contractors have a fair knowledge of the sites and nature of work in hand.

The RRVCP project is funded by the Islamic Development Bank, BADEA, and the Government of Sierra Leone and the Ministry of Agriculture and Food Security serving as the implementing agency.