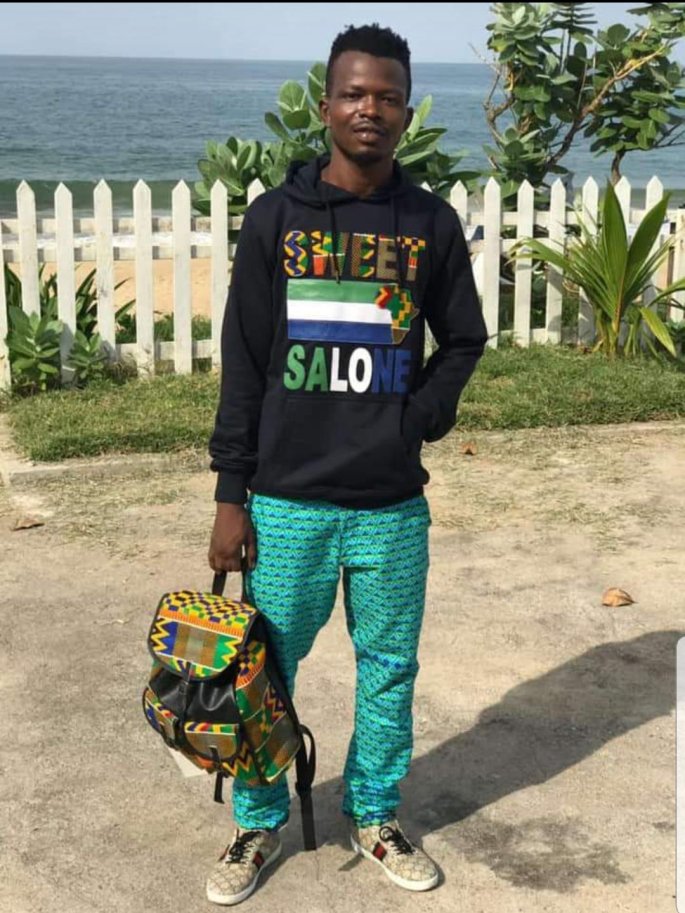 Today we have the opportunity to talk to the designer of all things Africana (Ankara). He went to St. Edwards Secondary School and he is currently a year two student at the East Freetown International College studying Procurement and Logistics. He is the Owner and founder of JAL’S DESIGN, Ibrahim Jalloh. You can contact him at 7 Sani Abacha Street opposite First International Bank (FIBank) or on his mobile phone on +23276119806 or +23234139990.

He chose this field because from his early years he has always been creative, as he loves to explore and add his personal touches to everything to make it different. He was, however, drawn into the business side of it by his younger sister. His sister used to buy some items from a local artisan at the Victoria Park and resells them, but during the Ebola period business activities slowed down and she was going through constrains to get these items as most could not produce or decided to stay home, she could no longer get the items she wanted. So one day out of frustration she said to him why can’t you be making these items for me I will purchase the necessary raw materials you need since you are not doing anything currently. He initially didn’t want to do it out of fear, but his sister who believes in his talent encouraged him to try. She gave him all the confidence he needed, but when it comes to her investing in the raw materials she was no longer enthusiastic.

So he took upon himself to start on his own and his sister was blown away. She was surprised to see his handwork was so good. She immediately joined him and that’s how Jal’s design started.

He is making customize contemporary t-shirt with logos and brand names using Africana (Ankara) wax and cotton, slippers, sandals for both men and women, shorts, bum bags, backpacks for children and adults, all types of hats, headbands and other accessories.

His business has been supporting him over the years as he is independent now and does not rely on hand out from people. His business has been a source of financial help and this has led to validate his belief that we all have the power to change our circumstances. Owing to the fact that he is now able to provide for himself, he is using his knowledge, skills, and platform to empower other Sierra Leoneans. He is currently training over ten young people with his artistry and has created jobs for five others as he alone cannot do all the work.

Most of the downside of his business is access to material, especially the hollandaise wax, cotton, and woodin which he uses most of the time. As we all know Sierra Leone is a small market so suppliers most times bring a few pieces of specific designs. Therefore, if you create something out of such material after the first production you cannot find the same material anymore and clients will keep asking for that specific material design. Another constraint is the frequent rise in prices of goods and materials used in production, which can directly lead to an increase in the cost to the client.

In the near future, he wishes to build the appropriate networks and distribution channels for his craft. Get the right connections to be producing and exporting his craft to the rest of the world. He wants to be able to create as much impact as possible, train and influence other youth positively. He wants Jal’s Design to be a household name and a leading brand in the creative fashion industry in Sierra Leone.

His wise words for the youth of this nation is that they should not be discouraged if they are not cut out for the mainstream educational system. They should take advantage of the technical, vocational and skills learning system formally or informally that will help them sustain their lives economically. It is very obvious that the government cannot meet the employment demands of this country. So, it’s about time as youths of this country to look for alternative means of employment, which is entrepreneurship.

So there you go readers, you heard of him first here@dasalonetiti_ryhima. I can honestly confirm that he is one of the best we have when it comes to creative designs. Try him, support small business and support local content. He is open to partnership with Sierra Leoneans entrepreneurs within the industry at home and the diaspora, as only Sierra Leoneans can build Sierra Leone.